We’ve had an exciting and increasingly active month! Such a fun age to be this kid’s parents, getting to raise him and watch him grow every day. He’s discovering new things daily, and it feels like we’re always seeing a new aspect of his personality come out as he reacts to his surroundings differently and more deliberately. He studies people and objects so intensely, and is starting to interact with humor (totally getting that some things are really funny!).

Jude is finally not hating tummy time now that he is figuring out that he can move himself around, as well as flip over to get out of tummy time whenever he wants. He isn’t crawling yet (still hasn’t realized that he can pull his knees under his body), but he moves himself in circles with his arms in order to grab whatever looks like it might be fun to stick in his mouth. He’ll stand for long periods of time with some balance support. He prefers using his hands to bring things to his mouth, so he doesn’t hold onto anything to help support himself, but we imagine that will be coming soon.

Whining doesn’t happen much, as Jude remembers after about 5 seconds that he can “talk” now, so he’ll stop complaining and spout out, “da da da da da da”. Everything is da da, except for when he makes smacking noises with his mouth and then puts sound to it, which comes out almost sounding like “ma ma”. He LOVES when “da da” comes home from work, and usually greets Ryan with squeals and screams, and lots of kicking. He also does this thing where he’ll try to not smile when you’re talking to him. Like he’s trying to keep a straight face and not let on to the fact that he’s enjoying your company, but his little smirk gives him away. Where in the world did he learn that from?? 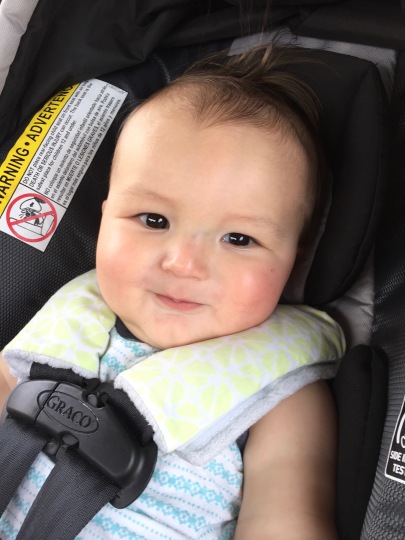 We are now doing solids (purees) twice a day after the two daytime feedings, and have tried several different foods. Jude absolutely hates greens unless I mix apples in with it. Who can blame him? His favorite is definitely apples, by themselves or with other foods. Probably the sweetest thing he’s ever tasted. I’m with you, Jude.

A sweet friend let us borrow their jumperoo, so Jude’s been getting some good exercise in! Good thing, too. Those chunky legs are just ridiculous. Ridiculously cute. He LOVES this thing, and loves it about 100x more when you’re watching him jump and applauding him. He also now expects to be cheered for when he flips over, and will look around for you and smile, like, “tada!” Everyone likes to be appreciated, right?

So yea, we’re still having fun with our little bug. So blessed that we get to do this parenting thing.