It would be an understatement to say that I fell behind in Jude’s monthly posts. A bit reflective of what happened toward the end of my pregnancy posts… I’m seeing a trend. Around month 9 of pretty much anything I start to trail. Which is actually quite unfortunate because I feel like so much has happened over the past few months! I did manage to take photos and measurements from each month, so at least I didn’t drop the ball entirely. There is some hope for me. 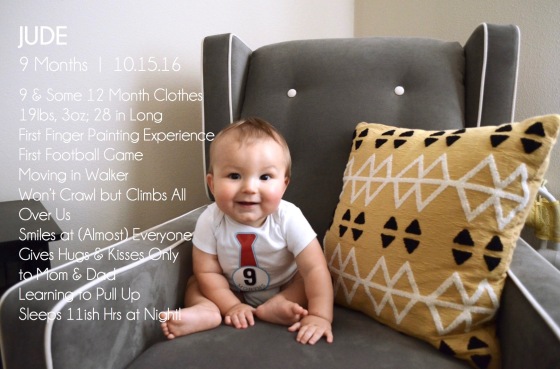 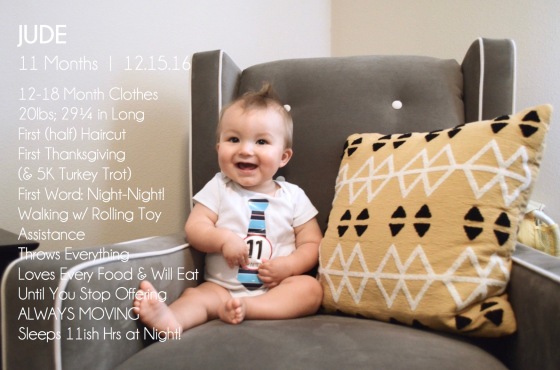 The last 3 months have been so much fun and so busy! The holidays are no joke. I’m going to have to start prepping in August from here on out. Props to those of you with lots of kiddos.
Jude has been a blast, and it is so much fun to be his parents! He’s a definite mama’s boy, and has been extra clingy to me lately. I think most of it is teething because he has super fussy spouts, but I’m loving it nonetheless. He is moving constantly and always getting into everything. He’s also super independent (no idea where he gets that from) and wants to “walk” everywhere, holding onto our fingers or furniture or whatever else is around. He’ll also stand for a second on his own, until he realizes that he’s not holding onto anything and has a mini freak out for a split second and promptly sits down. His favorite snack is turkey and cheese, and peanut butter. The kid eats so much, and will literally keep eating until you stop handing him food. The other day he ate an entire grilled nuggets kids meal from Chick-Fil-A with an apple sauce pouch. Four nuggets and apple sauce, y’all. How?

Jude now also gives kisses by request, and they are super slobbery. It’s so adorable that I don’t even care.

And guys. Jude said his first word(s). And it’s not mama or dada. Nope, it’s the thing he loves maybe even more than us: night-night. Guess we could have seen that coming, haha. Now when we put him to bed and tell him goodnight, he says it back! Emphasis on the T.

We’re so looking forward to this Christmas… Jude’s first! We will be traveling to see my family and I can’t wait to celebrate with everyone.

Next up: ONE YEAR. I might cry a little. I want to freeze time, but I am also enjoying every second of this season. That’s why they call it bittersweet, I suppose.

Merry Christmas and Happy New Year! Hope you are able to enjoy some quality time with the people you love.