Well, if you haven’t yet followed my update on Facebook or Instagram like 4 weeks ago, here’s the official news! We are so ecstatic about this little guy, and are super thrilled to meet him! He still remains nameless, as choosing a name for your kid is a lot harder than it would seem. You can be praying that his name becomes clear soon!

It’s been a while since I’ve updated, which kinda testifies to my crazy schedule lately. BUT, I want to share with you some photos from our super fun gender reveal party! Side note: it’s kind of hilarious when you tell anyone over 40 about your gender reveal party. That just wasn’t a thing before our generation, and most of our parents didn’t even find out whether they were having a boy or girl until delivery day. I’ve received lots of strange looks, confused comments, and some amazingly funny remarks concerning our party. One sweet lady asked me if I’m throwing a party to celebrate Caitlyn Jenner. This lady was like 70. I was impressed that she made that kind of association.

I have to say that my dear friend Jamie is a rockstar. I had this idea for a reveal party months ago, and while I was at a fitness conference in Dallas, she just ran with some ideas and turned this party into a most adorable celebration! Also, I do have to mention that I love throwing parties (if you didn’t know that already). There have been a few people that have rolled their eyes at me, and assumed that I’m just trying to make a huge, unnecessary deal out of my kid. If planning parties was a stressful thing to me, believe me, I would not have even thought about it. My husband and I plan 3 events a month for our residents in our apartment community, and it is a joy. This is just something God put in me, and it doesn’t matter what it is… I love a good party. In fact, I love parties even more when I get to throw them for someone else, because I have issues with a ton of attention being on me at once. Jamie is kind of the same way, and so she made this day elaborate and fabulous. I am very thankful for her. :)

People asked me after the reveal if I was shocked. Honestly, not so much. I had a feeling the entire time that it was a boy, and there was really no way for me to feel that way. I just knew! It was such an exciting moment, but not surprising. :) Ryan, on the other hand, straight up ran away from me immediately after popping the confetti balloon and pranced around the room, ending on the floor making snow angels in the blue sea of paper. You could say he was a little surprised. 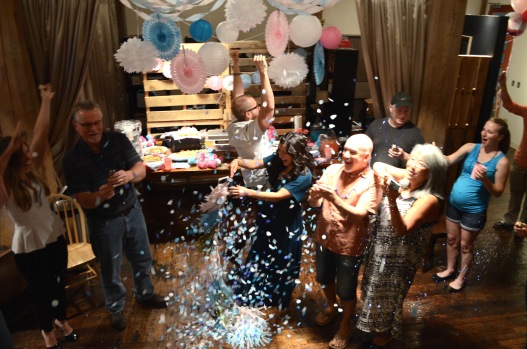 It was so fun to be able to have my parents in town for that weekend! We don’t get to see each other often since they live in Florida, and I really do wish I could share more of my pregnancy with all my family members. It was such a gift that they were able to fly in for the weekend, and we had a great time helping them soak in as much of Houston as they could during their short visit. My mom is making plans to stay with us for a couple weeks after the baby comes, which really gives this daughter a form of comfort entering a whole new phase of life.

Since that party we’ve had another appointment, and babe is growing right on track! He is super active, and literally kicks me at least once every hour of the day. That anterior placenta thing is supposed to make his kicks more subtle, which kinda scares me with how not-subtle he has been. My favorite times with him are early in the morning, right when I wake up (which is about 4:45/5a since I’m usually at the gym by 5:45). He’s most active at that time, and I feel connected to him in the quietness of the morning as I just lay and feel him move around. I do hope this doesn’t mean he’s a morning person, though I am enjoying it right now.

Maternity Clothes?: About 40% of the time

Stretch Marks: Not yet!

Sleep: It’s off and on. Some nights great, some not so great. The earlier I go to bed, the better.

Best Moment of This Week: Honestly? Sleeping til 8a on Sunday. Haha.

Miss Anything: My pre-pregnant body. Go ahead a judge me. I feel like a sumo wrestler. I’ll stomp on you.

Movement: Oh yes. He especially likes to kick my bladder (thanks, kid).

Food Cravings: Fall breads (pumpkin, banana, pecan). But let’s be real… that always happens around this time of year.

Anything Making You Queasy or Sick: Not really!

Have You Started to Show Yet?: Yes. Even people I don’t know now know that I’m pregnant. Which is better than them not being too sure.

Happy or Moody Most of the Time?: Mostly happy. Just really tired by noon every day.

Looking Forward To: The holidays! I know that’s a little ways away, but I LOVE this time of year!